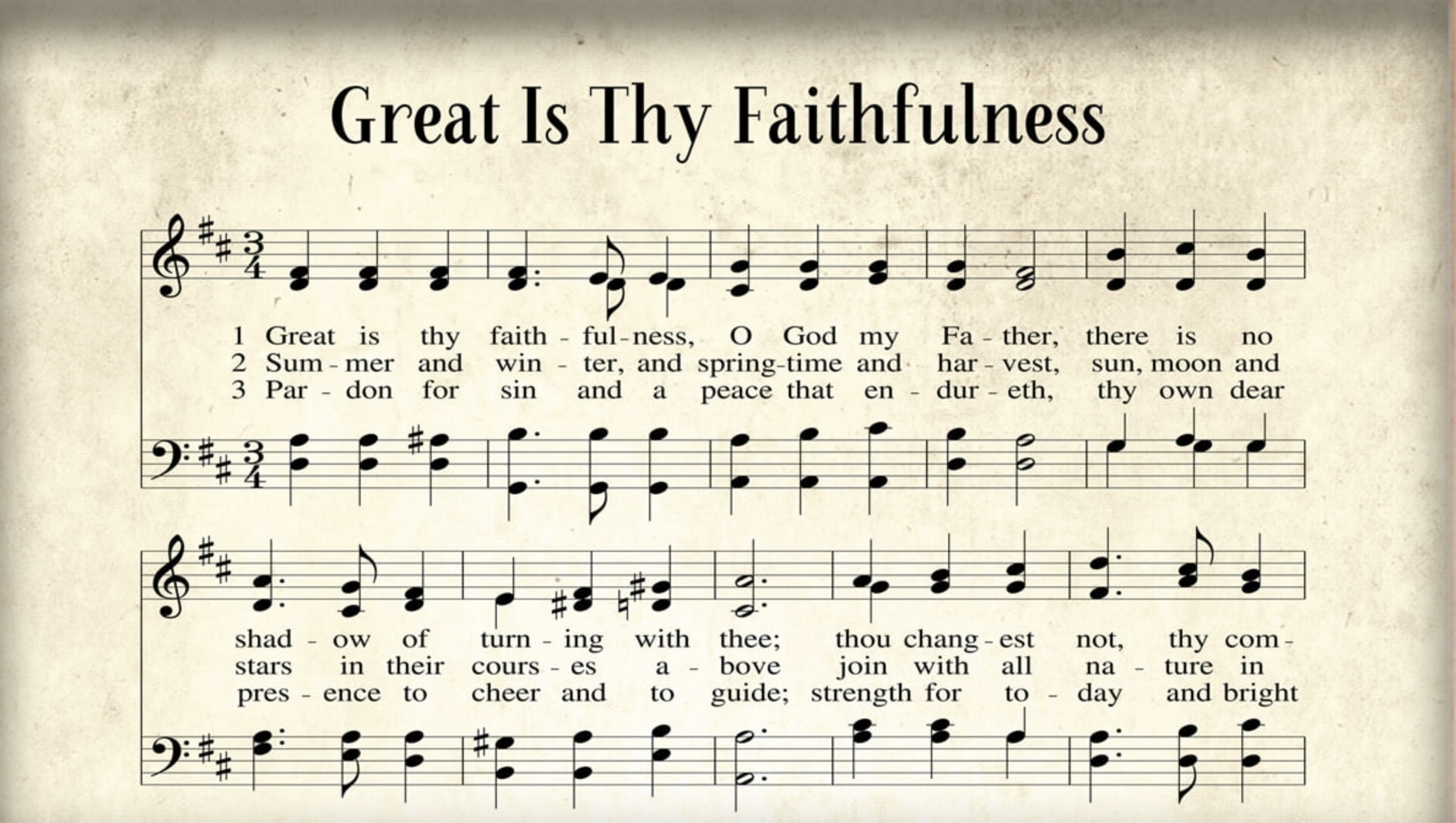 Recently perched in my usual spot at church, I had the unique blessing of hearing my son play a special arrangement of a timely hymn he had thoughtfully composed on his guitar. As the familiar tune of “Great Is Thy Faithfulness” resonated throughout the sanctuary, my thoughts swept away to a former day when that great hymn was fashioned from the recesses of some dear soul’s heart. I began to marvel at the thought of how many years the old hymn had blessed faithful congregants whose choruses took flight:

Great is thy faithfulness, O God my Father,
There is no shadow of turning with thee.
Thou changest not, thy compassions, they fail not;
As thou hast been, thou forever wilt be.

Within this verse alone, the theology expresses a truth that all hymns reveal: Jesus is the “same yesterday and today and forever” (English Standard Version, Hebrews 13.8). If our Lord was manifestly concerned with the complex condition of humanity then, we can be assured He deeply cares for us in our present plight, as well as in whatever the future holds. For,

The study of hymns is as complex as the hymn itself. Though simple and metrical in form, hymns integrate sentiment, poetry, literary and spiritual qualities, and possess the ability to unify congregations in “spirit and truth.” The term hymn comes from the Greek hymnos, seen in the Septuagint as the Hebrew translation of “song of praise.”

The Christian hymn originates in Scripture. In the upper room, Jesus offered His disciples His body as bread and His blood as wine (Mark 14. 22–24). This moving scene culminates in verse 26 as they “had sung a hymn” before departing for the Mount of Olives. One of several references to hymns in Scripture, verse 26 associates song with trial, for Jesus expressed that He would not partake of the “fruit of the vine” until He drank it “new in the kingdom of God” (25). The Christian knows and has revered ever since the next moments this choice hymn anticipated.

Preserved through the Middle Ages, hymns took on new life in the Protestant Reformation. The general love of song among sociable medieval communities explains the embrace of Protestant congregational singing. It was through the embracing of song that hymns evolved as an expression of a lively faith. Martin Luther confirmed this phenomenon with the crucial point that the spiritual song made in the vernacular provided people the Word of God through a means they could enjoy. The Protestant song was carried on the lips of traveling merchants, who through the booming print industry distributed sheet music to anticipating customers.

Before 1870, hymnals were typically small, five-by-three-inch books, whose pages consisted of psalms or poetry. These easy-to-carry companions were anthologies of poems, read as devotional poetry. When set to music, this poetry made it easy to commit biblical truths to memory. Much of what we enjoy in our hymnals today is a result of this fortuitous union. Drawn from pews and held in the hands of congregants, these hymns continue to burst forth in gloriously inhabited praise.

I encourage you, when next you hear or sing an old familiar hymn, to reflect upon the depth of its carefully chosen words. Consider the cost of its beginnings and perseverance through the ages, for many hymns were formed from the deep sanctums of entrusted trial. They produce hope and endurance through the practice of praise in difficult circumstances. Whether wrought from the forges of tested faith or from celebratory praise, many great hymns await the student. Forbearing souls, whose ink endures long after the resonance of notes fades, offer lessons of inspiration and resolve. For me, hymns are a friend, dusted treasures of truth that transform disdain into sweetest refrain.

As I recall that precious Sunday and my son’s earnest praise, my heart overflows in gratitude that the promises therein have been passed along to the next generation. The power of word and song, evidenced in the Christian hymn, is a gift of God’s constant love and care “to a thousand generations” (Deuteronomy 7.9).